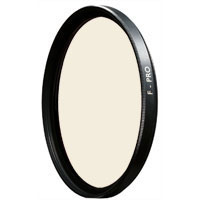 This conversion filter has an effect similar to that of Kodak Wratten 81A gelatine filter. Its strength of 18 Mired makes it approximately similar to the KR 1.5 conversion filter, except that it is less reddish as it absorbs a little bit red. It can be used like the KR 1.5 filter, especially with films that tend to a reddish rendition inherent to their emulsion or to the developing process. The 81A conversion filter is also ideal for landscape photographs at noontime and for flash exposures on daylight reversal film when the light emitted by a compact flash unit has too high a color temperature (and thus an excessive blue component). Its filter factor is approximately 1.2.

Single Coating
Each glass surface is vacuum coated with one layer of Anti-Reflection coating. This single layer helps to prevent internal ghosting and reflections. It also improves light transmission from approximately 92% (uncoated glass) to over 98%.

This filter uses our standard B+W F-Pro filter mount, which has a front accessory thread and is made of brass. Compared to the earlier standard mount introduced in 2001, the F-Pro mount has become thinner. Now it can be used with wide angle lenses, including most 24mm focal lengths on a full frame body, without vignetting. Another advantage of the F-Pro mount is it's modified retaining ring, which is no longer threaded in from the front, but holds the filter glass in place from the back. When removing a filter or lens hood that has been screwed on too tight to the filter, the retaining ring is not at risk of loosening.
NOTE: diopters are mounted in the older mount due to glass thickness.